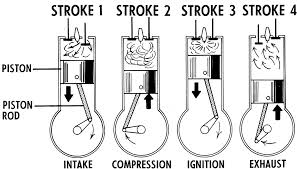 In this article, we will discus about 4 Stroke Engine Working Principle, Diagram.

An engine is a device, that converts the energy in a fuel into heat energy and the heat energy into mechanical energy.

Before discussing the Four-Stroke engines, we should know the working principle of an IC engine. In an IC engine, a mixture of fuel with the correct amount of air is exploded in the engine cylinder. This engine cylinder is closed at the one end.

If you want a continuous rotation of the crankshaft then there should be an explosion in the Inside of the cylinder continuously but before the explosion, the exhaust gases should be exhausted from the cylinder and fresh air should be admitted into the cylinder. That is how the piston moves back and forth. The sequence of the events taking place in an engine is called the working cycle of the engine.

Before discussing the IC engines whether it is four strokes or two strokes we should know some basic terms that are related to the engines which will help us to understand the working very easily.

Bore- The bore is the internal diameter of the cylinder.

Top Dead Centre- The top dead centre is defined as the topmost position of the piston towards the cover end side of the cylinder.

Bottom Dead Centre– The bottom dead centre is defined as the lowest position of the piston towards the crank end side from the cylinder.

Piston Speed- Piston Speed is defined as the average speed of the piston. Mathematically, it can be written as

where L is equal to the length of the stroke

N is equal to the speed of the engine in RPM

Mathematically, it can be written as

Where Vs is Swept Volume and Vc is the clearance volume

Air-Fuel Ratio – Air-fuel ratio is defined as the air to the mass of fuel input into the engine.

Fuel-Air Ratio – Fuel-air ratio is defined as fuel to the mass of air input into the engine.

In 4 Stroke Engines, there are four events that take place are suction, compression, power stroke and exhaust stroke. These four strokes of the piston are completed in two revolutions of the crankshaft. This is controlled by the valves at the inlet of charge and at the outlet of exhaust gases. This is controlled by cams that are connected to the camshaft and then this camshaft is driven by the crankshaft with the help of gears or chains. In a four-stroke engine, the camshaft runs at the half the speed of the crankshaft.

Let’s discuss the four-strokes one by one in detail:

During the compression stroke, the piston moves upwards and both the inlet and exhaust valves are in the closed position. The charge that has been taken is compressed by the upper movement of the piston. In case of diesel engine only air is compressed and diesel is injected at the end of the stroke and then this ignition takes place due to the high pressure and temperature of the air. In the case of a petrol engine, the mixture of air and fuel gets compressed in the cylinder and the mixture is ignited by spark plug.

After the combustion of this fuel, a tremendous amount of heat is generated and very high pressure moves the cylinder downward. The downward movement of the piston is called the power stroke. During this stroke the connecting rod transmits the power from the piston to the crankshaft and then the crankshaft rotates. During the power stroke, both the inlet and exhaust valves remain closed.

During the exhaust stroke, the piston moves upwards and in that case, the inlet valve is closed and the exhaust valve gets open so that exhaust gases go out.

we can see from the above cycle , there are four strokes but only one Power stock is there and the three are idle strokes. The power strokes provide the necessary momentum for the useful work.

From the above explanation, it is assumed that:

On the basis of above assumptions, we can draw and understand the P-V diagram as below:

In this process, fresh and fuel mixture comes inside the cylinder and the piston moves from the Top dead center to bottom dead center.

In this process, the drawn charge in the cylinder is compressed as the piston moves from Bottom dead center to top dead center.

During this process, the spark plug gets ignited and fuel is burnt. This process occurs at contact volume and there is increase in pressure.

During this process, the gases expand and exert pressure on the piston and piston moves from top dead center to bottom dead center.

In this process, the burnt gases exhausted out and there is decrease in pressure at constant volume.

During this process, the exhast gases completely exhausted from the cylinder and piston moves from bottom dead center to top dead center.

Also check What are bearings and their types