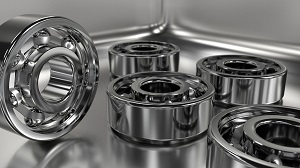 This article will understand what the bearings are, their types, and how life can be increased. Each and everything about the bearing will be explained in simple words so that everybody could understand.

Bearings are a device that is used to support and guide the rotating or sliding shaft. Generally bearing is designed to have the following functions:

Bearings are generally designed to perform 3 kinds of functions which are given below:

we will discuss each of them one by one.

the bearing’s main function is to reduce the friction between the sliding parts. Bearings have a common objective which is to reduce friction whether they are used in automobile machines fleet or at any other place.

the bearing’s internal rolling mechanism is designed in such a way that it requires less energy and effort to slide the object over the other.

The shaft is generally trying to push the bearing in the same direction as the load moves. If we choose the wrong bearing then it might not be able to carry the kind of loads and repairing might get failure. The load is dependent on the direction and the weight.

Before understanding this we need to first understand the type of loads acting on the bearing. There are three kinds of loads which are given below:

The word radial means in the direction of the radius moving in outward of the circumference. Radial load pushes down the from outward of the bearing to the inward of balls cage and then in a race of the bearing. The load acts perpendicular to the center of the axis of the shaft.

The bearings help in guiding the moving parts one over the other. If there are no bearings, one part will not roll over the other smoothly and consistently.

Parts of a Bearing

A bearing consists of the following four parts:

the outer race or the outer ring is the exterior part of the bearing and it protects the internal parts like in a cage rolling elements of the bearing. So it’s should be machined properly.

Balls or rollers are the rolling elements that provide the cushion to ease the moving friction of the shaft within the housing. These rolling elements keep the inner and outer race separated and enable them to move freely and easily.

Ball bearings are generally classified into two types which are given below:

Single-row ball bearings are the most used bearings. In these ball bearings, the balls roll in the cut of both the inner and outer races. It is designed for the radial load but can also bear thrust load in either direction.

The main feature of the angular contact ball bearing is that it has two high thrust supporting shoulders. Out of these two, one is on the inner race and the other is on the opposite side of the outer race. Though this design can support heavy thrust load in one direction, it can also be combined with a moderate radial load sometimes.

The ball thrust bearings are designed for high thrust applications.

The tapered rollers bearings are similar to the wide edge of the cone rather than a circle. These bearings can support all kinds of loads i.e. radial load, thrust load, or a combination of these two loads. Tapered roller bearings are used in automobiles, and various farming vehicles, including:
• Transmissions
• Transfer cases
• Front wheels
• Trailer wheels

In these bearings, the rollers are kept evenly spaced by a cage which guides their turning movement on the flat surface of the two races. Cylindrical rollers bearings are used in:
• Transmissions
• Differentials
• Rear Axle Shafts

Also check video on how to read specifications of bearing

1. What is the function of the bearings?

Reducing the friction
Support the load
Guiding the moving parts

2. What are the parts of a Bearing?

If you have any doubts, please comment down below.