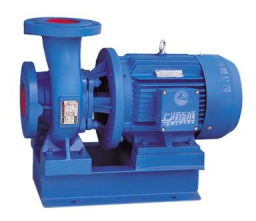 Centrifugal pumps are defined as rotodynamic pumps in which rotating impellers increase the pressure of the fluid. Centrifugal pumps are used to transfer the liquid from one place to another say at a certain height through the piping system. In this case, the mechanical energy of the motor is converted into hydraulic energy by centrifugal force acting on the liquid.

Whenever a certain mass of fluid is rotated by any external source, say an impeller in the case of a centrifugal pump, is thrown away from the central axis of rotation which enables liquid to rise to a higher level. The mechanical energy of the motor is converted into hydraulic energy by centrifugal force acting on the liquid

A wheel with a series of backward curved vanes and at the center of curved vanes, there is an inlet of the liquid and also called the eye of an impeller. That wheel is mounted on the shaft which is coupled with the motor. As the motor rotates, the wheel gets rotated and thus the impeller. This impeller when in rotation force the liquid out due to centrifugal force. Hence, the liquid gets displaced and the space in get vacant in the casing.

To fill that space, liquid rushes in, and then again impeller throughs the liquid out in discharge pipes. The speed of rotation of the wheel imparts kinetic energy to the liquid in terms of velocity which the converted into pressure (potential) energy.

There are three types of the impeller which are described below:

The open impeller is defined as the impeller which has vanes attached to the center Hub or directly mountain on the shaft. There are no surrounding walls or shrouds. That is why this type of impeller is weaker compared to two other impellers. These impellers are generally very easy to clean and used in smaller pumps and used for pumping the contaminated solid type liquids.

Semi-pen impellers have vanes mounted in the walls on one side. It is used to transfer lightly contaminated and abrasive liquids and slurries.

Casin is defined as the Air-tight chamber surrounding the impeller. There are generally three types of the casing which are described below:

We will discuss all these one by one:

In the volute casing, the area of the flow increases gradually from the eye of the impeller to the delivery pipe. The increase in the area decreases the velocity of the flow and a decrease in velocity increase the pressure of the flow.

In the case of Vortex casing, the circular chamber is provided between the volute chamber and impeller. Vortex casing helps to increase the pump efficiency by reducing the formation of eddies.

In this case,  the impeller is surrounded by a series of guide blades that are mounted on a ring called a Diffuser. It is designed in such a way that water that is leaving the impeller, enters the guideways without shock.

The suction pipe is the pipe that is mounted with the help of a flange at the inlet of the pump. One end is connected to the eye and the other is dipped in a liquid.

The delivery pipe is the pipe that has one end connected to the eye, and the other to the overhead tank or directly send for application on the machine.

As discussed Foot valve, the strainer is a part that is used to prevent the entry of foreign particles/material into the pump. If it is not there, foreign particles might go inside the pump and can damage the casing and impeller.

Whenever a certain mass of fluid is rotated by any external source, say an impeller in the case of a centrifugal pump, is thrown away from the central axis of rotation which enables liquid to rise to a higher level. The working of the Centrifugal pump is as follows:

The centrifugal pump has the following types of head

The suction head is defined as the vertical distance between the eye of an impeller and the level of the sump. It is also called a suction lift and is denoted by ‘hs‘

The delivery head is defined as the vertical distance between the eye of an impeller and the level where water is delivered. It is denoted by ‘hd‘

The static head is the sum of the suction head and delivery head. It is given by

The manometric head is the head against which the centrifugal pump has to work.

Where,
Q = Actual liquid discharged at the pump outlet per second
q = Leakage of liquid per second from the impeller

ηm= Power at impeller / Power at the shaft

Also, Read What is Hydraulics and Hydraulic components

What are wear rings in centrifugal pumps?

What are the types of Centrifugal pumps?

What are the parts of a centrifugal pump?