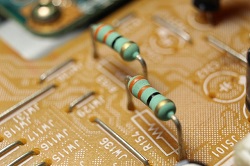 This is the circuit diagram of a variable resistor.

Variable resistors are mostly used for electric circuits to regulate the value of current and voltages.

The linear resistor’s resistance does not vary with the flow of current through it. When we applied voltages in the circuit so the current always be proportional to the voltages applied across it. Linear resistors are classified into two types.

This circuit diagram of the linear resistor.

The linear resistor absorbs the electrical energy in the process where it acts as a hindrance to the flow of electricity by reducing the voltage. The electronic circuits the heat dissipation is typically a fraction of a watt. In the words, the linear resistor work according to the circuit. In the diagram voltage through current flows in the whole circuit.

Use of Linear Resistors

The linear resistors use in tuning and calibration the circuit. Today, the usage of rheostats was replaced by electronic switching. The rheostats have lower efficiency.

The non-linear resistor works as the voltages and current characteristics vary non-linearly. The value of current and voltages vary depending on other factors such as light and temperature, but they may not be linear.

This circuit diagram of a non-linear resistor.

This is a diagram of a series resistors.

Two resistors are joined between the same two nodes, they are in parallel. Resistors connected in parallel have the same voltages drop but the currents flowing through these resistors are not necessarily the same. In the electrical, parallel resistors do not always look like two parallel lines.

This is a diagram of a parallel resistor.

In the parallel circuit, two or more paths for the current to flow through simply remember that parallel means two paths up to thousands of paths. The flow of electricity is divided between each according to the resistance along each route. When branches meet at a common point, the current branches out and recombined. When resistors are joined in parallel circuits more current flows from the source than would flow for any of them individually and the total resistance is lower.

The four-band color code is the most common variation. Resistors have two bands for the resistance value, one multiplier, and one tolerance band. The diagram shows the four bands are brown, red, green, and orange.

This is a diagram of color coding resistors.

Color code uses in broadcast products. If color code is mentioned on the component easily identify its value and function. I mentioned resistor symbols, their types, uses, and color-coding resistors.

Also, Read What is Diode?