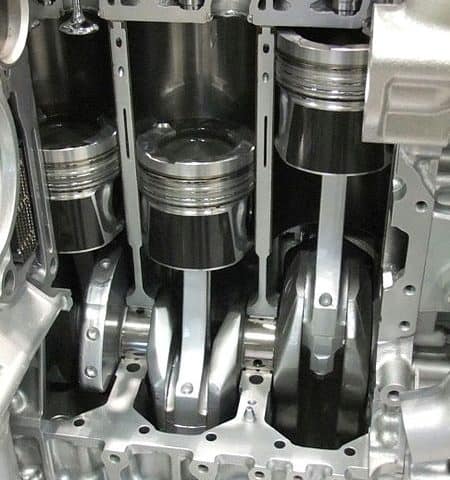 There are Different Parts of an IC Engine. Internal combustion engines or IC Engines have a number of parts which are given below:

Different Parts of an IC Engine

The cylinder is the main and very basic part of an engine which confines expanding gases and forms a combustion space. In a cylinder there is a piston which slides up and down movement and in this cylinder, the piston operates to suck the air or air-fuel mixture and this mixture is compressed by the piston in the cylinder and then the gas is allowed to expand transmitting power for the useful work. All these activities are happening in the cylinder only. Cylinders are made of high-grade cast iron usually in a single piece. These cylinders are maybe air-cooled or water-cooled.

A cylinder block is defined as the solid casting body which includes the cylinder and the cooling fans in case of air cold engines and a water jacket in case of water-cooled engines.

The cylinder head is the detachable portion of an engine which covers the cylinder and includes spark plugs, valves and injectors. The cylinder head usually contains the inlet valve for admitting the mixture of Air or an air-fuel mixture and the exhaust valve for discharging the gases that come through the combustion.

A piston is a cylindrical part which is closed at the one and is connected to the connecting rod by a piston pin. The piston should have the following properties like

Pistons are made of cast iron due to their high compressive strength or aluminium alloy due to their lightness.

A piston pin is used to join the connecting rod to the piston and it is also called a wrist pin or gudgeon pin.

The crankshaft is the main shaft on the engine that converts the reciprocating motion of the piston into the rotary motion of the flywheel. The space that supports the crankshaft in the surrender block is called the main journal and the part to which connecting rod is attached is known as the crank journal. It is made of drop-forged steel or cast steel.

The flywheel plays an important role in the engine and it is made of cast iron. The flywheel has the following functions.

The crankcase is the part of the engine which supports and encloses the camshaft and the crankshaft. It provides the reservoir for the lubrication oil. There are many accessories mounting on it such as an oil pump, starter motor, ignition components and oil filter. A crankcase is generally made of cast iron or cast aluminium.

A camshaft is a shaft which raises and lowers the inlet and exhaust valves at proper times. These are generally connected by the crankshaft by means of gears, chains or sprockets.

The main parts of an engine are the cylinder, cylinder head, piston, crankshaft and camshaft. There are many other parts as well which has explained in the article.

2. What are the engine parts of car?