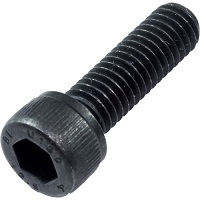 Bolts are defined as threaded fasteners with a head at one end and body or thread at another end. Bolts are designed to insert in the holes and then it is tightened by the nuts by rotating the nuts on the threaded part of the bolts. Bolts can also be tightened by rotating the bolt head against the nut. For tightening of the bolts, we need tools like a ring spanner or Double end spanner, etc.

Parts of a Bolt

Let us discuss the parts of a bolt. Here the example of Hex bolt is given.

The Head is the enlarged shape of the bolt and made at one end to provide a bearing surface and for turning the fastener.

The bearing surface is defined as the supporting surface for the part it fastens.

The thread length of a bolt is the total length of the thread from one end to other.

Shank is that part of the bolt which lies between the head and starting point of the thread.

The chamfer is the conical surface at the starting end of the thread.

The most common type of material used for fasteners is steel. The grade of steel deepened on the application or the strength required. Bolts are also made of stainless steel, titanium, brass, plastic, etc.

Process of Making a Bolt

A summary of the production process:

There are many types of bolts which we will discuss one by one.

U-Bolts are those types of bolts which ar having the shape of a U and that are having male threads on each side of the bolt. These threads are partially threaded. These bolts are used to clamp the object at a place. These u shape bolts are used to support the piping, for example, supporting the exhaust pipe in a car. A bracket is placed in u-shape bolts and then nuts are tightened on both sides. Sometimes a gasket is placed between the u-shape clamp and object so that it should not wear due to the vibrations. A gasket might be of rubber or any other soft material.

Lag bolts are heavy-duty fasteners and are mostly used in woodworking. These bolts make their own mating thread when tightened.

Eye bolts are those bolts that have a threaded portion at one end and make a ring at another end. These eye bolts have a specific purpose. These are used in industrial applications. These are used to mount on the machine and ropes, chains, and shackles are secured by it. Then we can lift the machine or any equipment with the help of an eye bolt by a crane or Forklifter depending on the application. These eye bolts should be designed as per the weight of the machine which is given by the machine manufacturer. So, the safe working load needs to be checked before using the eye bolts.

Socket screw bolts are also known as Allen bolts. These bolts have a hexagonal socket in their head and are designed to use with the fallen wrench set. Allen bolts provide strong gripping.

Elevator bolts have a thin body and a round head. These elevator bolts are used in spaces where there is less space for example, in elevators and conveyors.

Flanged bolts are those kinds of bolts that have a circular flange under their head and act as a washer and distribute the load. These bolts are also known as frame bolts. These bolts are fabricated from steel or stainless steel.

Square head bolts are having the head square means having four sides and are threaded to receive a nut. These square nuts are used in railway applications or to achieve an aesthetic traditional look.

Stud bolts have a thread on both sides of the bolt and it does not have any head. Nuts can be fastened from both sides.

Arbor bolts are specially designed bolts. These bolts are not general that you can find in local hardware stores or in your plant. Arbor bolts have a washer permanently fixed at the tip of the bolt. These arbor bolts are specially designed for power tools. These tools hold the tool securely and keep the blade in its place. If you see an arbor bolt is loose, kindly do not operate the machine till the time it is tightened or replaced with a new one.

Countersunk bolts are flat head surfaces with a hex socket in the head. An Allen key is used to loose or tighten the bolts. These bolts are used so that bolts fit completely in the workpiece as per the pre-designed application.

Nuts are the types of fasteners that are internally threaded and are used on the external threads mating parts like bolts and studs to assemble and disassemble two or more components.

Hex nuts are of hexagonal shape and are the most common types of nuts having internal threads. These are used for fastening to hex bolts or socket cap screw.

Lock nuts are nuts that are used to prevent the loosening of bolts. Thes bolts come in various sizes and shapes. Lock nuts are also called self-locking nuts and these are widely used in the industry.

The coupling nut is a hexagonal-shaped nut and is used to connect the two male threads. Due to their hexagonal shape, these nuts are driven by wrentch.

Wing nuts are the nuts that are having wings on both sides the nuts that allow for manual tightening or loosening of nuts. It can be easily rotated by hands.

What is a Bolt?

Bolt is defined as threaded fasteners with a head at one end and body or thread at another end. Bolts are designed to insert in the holes and then it is tightened by the nuts by rotating the nuts on the threaded part of the bolts.

What is a Nut?

Nuts are the types of fasteners that are internally threaded and are used on the external threads mating parts like bolts and studs to assemble and disassemble two or more components.

What is the Difference between Nuts and Bolts?

Also, Read What are Different Types of Threads